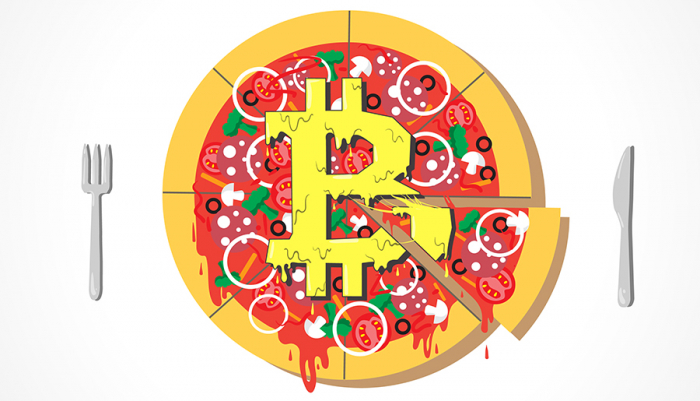 The early years of Bitcoin are of little interest to the corporations looking to get involved with cryptocurrencies. The story of the famed “Bitcoin pizza”may not appear during research.

When this historic pizza was being served up, Bitcoin was seen as an obscure digital currency born from the 2008 financial crisis. In 2021, it’s viewed as digital gold. Big moves by big players – a combination of economic and societal factors – have put Bitcoin front of mind for the world’s biggest CEOs, founders and banks as they consider the future of their treasuries. In 2021, it is now irresponsible for public companies not to have a treasury allocation in crypto if they truly have their shareholders in mind.

How did Bitcoin make its unlikely journey from pizza to Wall Street? In 2014, Overstock.com became the first major retailer to accept Bitcoin. This was groundbreaking and seemed like the start at of a revolution. The revolution never materialized but adoption continued to grow. Now, Bitcoin has broken into the mainstream – so much so that holding Bitcoin in treasury is something all institutions must consider. MicroStrategy, Tesla, Galaxy Digital Holdings and Square are the top four publicly traded companies holding Bitcoin. This year, MicroStrategy and Tesla made headlines with a combined $2.8 billion worth of Bitcoin bought. Though these four have hogged the spotlight, there has been a tonne of institutional momentum behind Bitcoin – too much to ignore.

Bitcoin in 2020 was meteoric: it beat the S&P 500 and Gold on year-to-date returns. This growth continued with an all-time high of $58,000, giving exposure to new investors and institutions. Goldman Sachs has now restarted its cryptocurrency trading desk. Goldman also reports that 40% of its surveyed clients already have exposure to crypto.

Citi recently released a report titled “Bitcoin At the Tipping Point'', heralding Bitcoin as a serious asset. This wasn’t the only big-name backing. Deloitte partnered with MicroStrategy to releasee a playbook for corporates buying crypto. The good news is that you are still early. This is the beginning of the institutional race to hold Bitcoin.

Bitcoin was born in response to a financial crisis, now it’s growing up amid another seminal crisis. The pandemic lockdowns prompted mass unemployment and decreased cash flow, decimating many industries. The world’s largest economies have maintained the lowest interest rates on record hoping to stimulate their economies. Companies with excess cash suffer from these low-interest rates, they cannot earn attractive yields.

McKinsey's study of 54 economies, representing 93% of global GDP found that governments announced $10 trillion in stimulus in two months. That’s three times more than they did during the 2008 crisis. The Federal Reserve has pledged to buy an unlimited amount of government-backed debt. These factors have pushed corporations to look at Bitcoin seriously. Holding cash in this type of environment is simply bad for business.

Unlike cash flow, Bitcoin is unaffected by public health and economic crises. Companies holding Bitcoin benefit from its diversification and its outperformance of traditional investments that are directly impacted by the crises. Bitcoin is criticized because it does not generate yield. But when interest rates are as low as they are now, neither does fiat.

There is a finite amount of Bitcoin in the world. The Federal Reserve and Central Banks continue to print money as if it’s going out of fashion (it is). Meanwhile, Bitcoin’s limit of 21 million bitcoins helps to build the “store of value narrative”. This is an attractive factor when compared to fiat’s loss of purchasing power due to inflation.

If this were any other asset with this level of institutional interest, there would be no critics left on the sidelines as they would be too busy filling their coffers. Bitcoin is here to stay and it will only continue to grow. Decision makers will have to answer to shareholders on the company’s crypto strategy and how much capital is being allocated to crypto. It will be a dominant question on earnings calls, and from financial media. If the answer is none, shareholders will want to hear a better reason than what ultimately culminates in a head in the sand strategy.

This year proved that Bitcoin is not a fad, or a short-lived bubble, and in the coming years it will be considered a must-have in all corporate treasuries. For those wishing to future-proof their treasuries, it is simply irresponsible not to allocate capital to crypto.